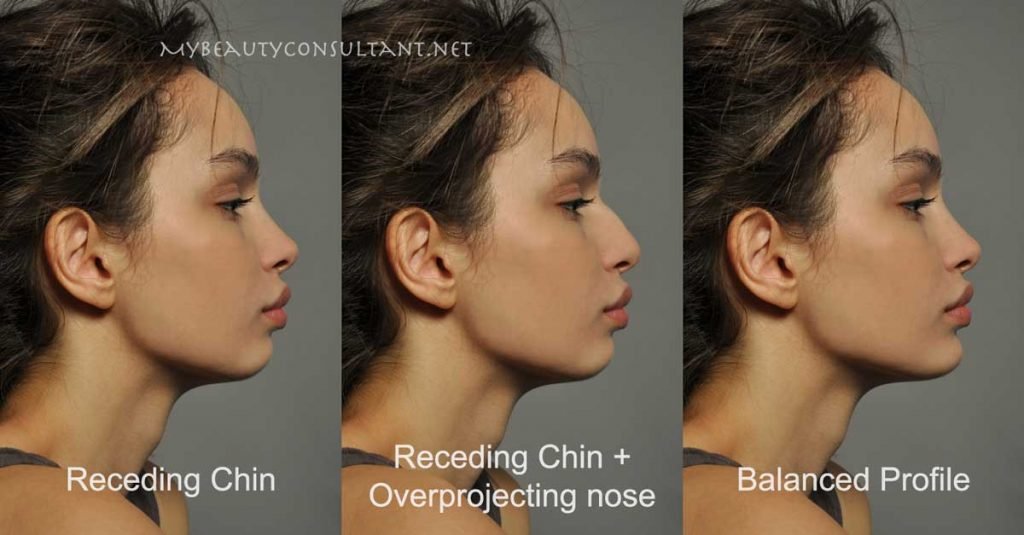 If you’ve landed here you probably already know that both a nose job and a chin implant have the potential to make the face seem more balanced from profile. However, depending on your individual facial features, it may be more beneficial to opt for one instead of the other.

First what you should know is that its not only the chin and the nose that determine if your profile looks off. Other facial features such as lacking cheekbones or a prominent brow ridge can make the relationship between the projection of your chin and nose look even more off. Why does this matter? Because it can make it seem to you that your nose is the problem when its really just your chin or vice versa.

To help make this decision easier for you here are some tips on how to choose between a rhinoplasty or a chin implant.

Chin Projection Isn’t the only factor you need to consider

Chin Height and width are also key factors in an attractive lower third that sits in balance with the rest of your face. A bulbous appearance of the nose can be dulled by a chin implant that increases chin height. A taller chin has the ability to spread the focal point of the face and bring less attention to the nasal tip.

Of course, there are other potential benefits to a taller chin such as a more attractive jawline, reduction of a mentolabial fold, and even a lower likelihood of developing nasolabial folds.

This is one of the MOST IMPORTANT factors you need to consider before getting either surgery. For males, chin projection is a MUCH more important feature than a perfectly straight nose. Chin projection for men adds the look of confidence, masculinity, and significantly increases sex appeal whereas a slightly straighter/smaller nose will not change much. So men really need to consider how much of a flaw their nose is before opting for rhinoplasty.

For females, excess chin projection looks horrible. It adds so much masculinity to the face and just significantly reduces facial harmony. This means that if chin projection is already adequate any further advancement of the chin will only make you look worse. However, the shape of the nose is much more important for females than males and a small difference in the shape of the nose really can make a difference.

Do you have small or recessed cheekbones?

Lack of cheekbone projection can make your nose seem way to big. This is because it makes your face seem further back from your nose and can create the illusion that your nose is too big.  Some people don’t take this into consideration and end up getting a nose job where heir nasal projection is decreased significantly and end up looking completely plastic and fake.

If this is you it may be beneficial to look into if you are a good candidate for a chin implant. Cheek fillers are also an option you should definitely consider before rhinoplasty.

Rhinoplasty has a high botched rate than chin implants

This is something serious you need to consider. What if your surgery doesn’t work out how you expected it to. Rhinoplasty can be a very difficult surgery to find a revision for. A chin implant is removable, and while it won’t always give you your dream results at least you have the option of going back to baseline.

When to consider a non-surgical rhinoplasty

A non-surgical rhinoplasty is essentially fillers injected into various areas of the nose to make the slope of the nose seem straight. It does this by increasing the amount of volume slightly above and/or below the bump of the nose.

As mentioned before, a straighter slope of the nose is a highly masculine trait. This means that while men can have great success with non-surgical rhinoplasties especially when combined with chin augmentation, the use of this technique on women is limited. Remember that a curved nose is whats desired for a female. There is no point in masking a bumped nose by making it look even more out of place.

This may seem overwhelming if you are just being introduced to these concepts, but hopefully, this post will help you choose the surgery that’s better suited for your face. In case anyone wants personalized guidance, I do offer private consulting to help clients with their plastic surgery journey.